Safe & Effective for All Ages

Research has shown that children who get adjusted are more resilient to disease.

Childrens’ bodies are functioning at optimum level because there is less nervous system interference; therefore, they are healthier overall!

Chiropractic can help with common childhood related concerns, such as allergies, asthma, colic, bedwetting, headaches, sinusitis, reflux, and chronic ear infections. Additionally, it is especially important to have a child adjusted after any significant trips or falls that naturally occur during childhood to help maintain the health of their still developing and fragile spines.

By having your child’s spine checked periodically by your chiropractor, you can help to prevent your child from dealing with chronic neck and back pain in their teenage years or even in adulthood.

It’s important to teach and instill healthy habits in our children so our children will be able to live their lives to their FULLEST POTENTIAL!

Allow Dr. Clemente to check your child’s spinal health today! For more information about the safety of chiropractic for children, please go to www.icpa4kids.org.

Will my child receive the same chiropractic treatment that I do as an adult?

Absolutely not! Adjusting a child or infant is done with an extremely gentle approach, with the same amount of pressure as balancing a dime on your pinky finger. There is no “cracking” or “popping” sound when adjusting children or infants either. Many parents say that it appears as nothing was even done to their child.

I am sure the next question in your head is: Why do infants need to be adjusted by a chiropractor?

Dr. Clemente very gently checks and adjust an infant’s spine as early as birth.  Why you ask?  Think about how your baby was positioned in-utero during your pregnancy, maybe a hand was rested in just the right way against your baby's cheek or maybe your baby was breech at some point.  Then think about your birth, did you have any form of induction to induce labor or was there a need for forceps, or did you provider have to use their hands to help baby out?  If any forceful puling was used it could cause a spinal misalignment that would benefit being adjusted by a chiropractor.

For instance, if a baby is having difficulty nursing on one side, it is possible something in the baby’s neck might be misaligned which could be causing some level of discomfort when turning her head to nurse on a particular breast. Once the misalignment in the neck is corrected with a safe and gentle chiropractic spinal adjustment by a specially-trained provider, the baby should be able to nurse comfortably and efficiently on both sides.  Click here for more information. 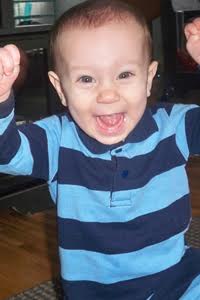 “Owen started sleeping through the night for the first time in almost six months after his second adjustment.”

My 10.5 month old son Owen has had a difficult past few months. Starting in September 2010, when he was just 6 months old, he began getting massive double inner ear infections. His pediatrician prescribed antibiotics which did not help or clear the infection. This continued until January 2011. He was on a total of 4 different rounds of antibiotics, including painful shots given for three days in his legs. My precious little guy has had a ton of GI issues, yeast infections, belly aches and trouble sleeping as a result of all of the antibiotics that were being continuously pumped into his system for four months.

My research led me to Dr. Nicole Clemente. She specializes in pediatric chiropractic treatment and treats expectant mothers as well. And the best part-Owen actually likes her. He was a little cautious at first, as he tends to be around new people, but she quickly won him over. After just two treatments with Dr. Clemente, I returned to the pediatrician and was told that the ear infections were gone in both ears! In just two adjustments, Dr. Clemente did what 4 months of antibiotic treatments failed to do, not to mention the hundreds of dollars we wasted on all the visits to his pediatrician on “treatments” that failed to help my little guy in any way.

After his first visit with Dr. Clemente, Owen began sleeping better and seemed overall to be in better spirits. This is a baby who hasn’t slept through the night in almost six months, which he did immediately following his second adjustment. I would recommend infant chiropractic adjustment to anyone whose child is having ear infections or similar issues.

Dr. Clemente’s approach is extremely gentle, making even my shy guy comfortable enough to return without tears or discomfort. Dr. Clemente took the time to discuss natural health care for Owen and answer all of my questions. (I brought a list the first time, not knowing a lot about chiropractic treatment in infants). This is an alternative approach that is safe for babies, and has helped my son so much and so quickly.”

Allow your family to live life to its FULLEST potential!